I’ve been trying to learn how to create and use docker and I thought that could be a nice idea to create a machine learning docker as a starting example to have something running.

But in any case the full sourced of this is available in this git:

Before starting its worth mentioning that going through getting started with docker is a excellent starting point for understanding many of the docker topics and will give you the tools required.

First lets create a new folder for our docker image an the Dockerfile:

Now we add the initial lines to our docker file:

Lets build our docker, initial build will take a while:

And them run the docker in iterative way since there is nothing there yet.

In the iterative shell we could just try to list files and exit:

Lets add now python and pip to the docker image adding to the Dockerfile:

Now we could just rebuild and run:

Now lets create a folder for our python app:

Modify the Dockerfile to call our python program:

Rebuild and run the docker will produce:

Sometimes we like to clean our docker system, if we do this we could see the containers:

To stop and remove our containers we could do:

Now we are going to change our python installation to be a machine learning installation, edit the Dockerfile and change the apt-install to be:

Now we could modify our test program /python-app/test.py:

And this will be the output:

Is time to do a simple sentiment analysis using TextBlob Now we are going to create a folder for our configuration:

We will add this file for set python dependencies in /cfg/python-deps.txt

We are going to modify the Dockerfile to copy the config, and invoke pip to install dependencies, them we will download the corpus data for TextBlob:

So lets add some sentiment analysis to our test program:

This will be the output:

Modify Dockerfile to export a port and set and environment variable:

And finally lets sketch a simple test service in python-app/flask-web.py:

Now to run our docker in daemon and map the expose port to port 80:

Remember that the docker could be stop with:

We need to know the IP of our container, if we are using docker machine and we haven’t change the default VM we could use:

Them we could test using the url : http://IP/api/test

We should see this:

Now lets create a basic REST service that return the sentiment from an string, we will add some basic error handling to our flask service, just edit /python-app/flask-web.py:

Them we could test our service: 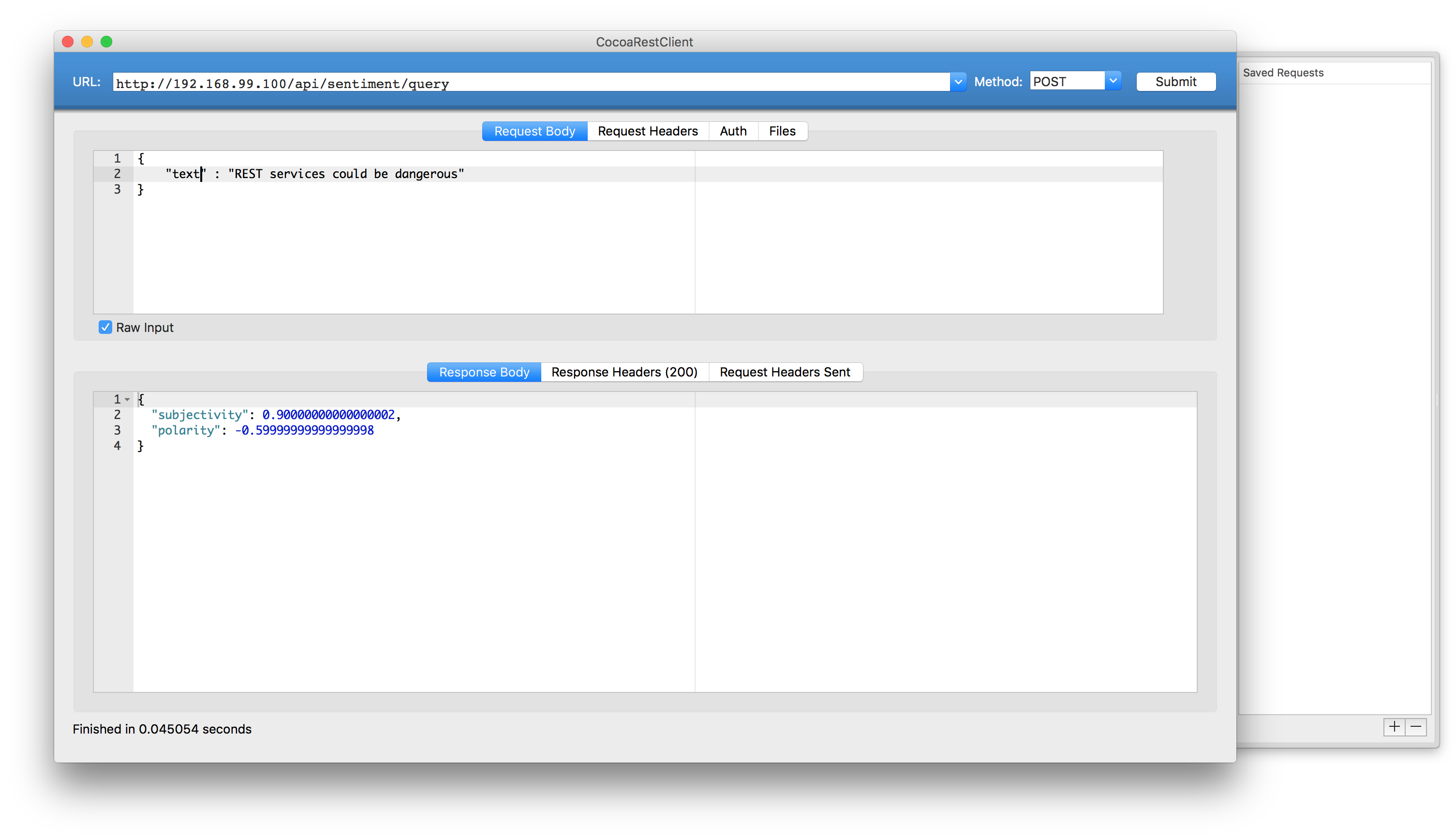 About Juan Medina
I'm just a normal geek that code all kind of stuff, from complex corporate applications to games.

Games, music, movies and traveling are my escape pods.